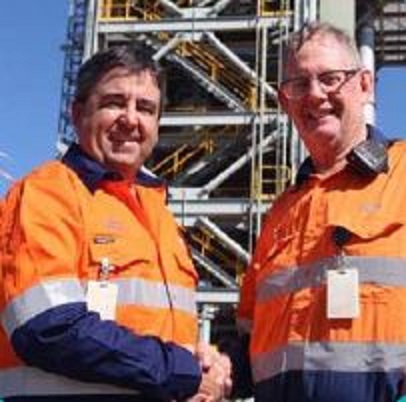 Changing of the Guard

Peter Zambelli
General Manager, QER.
A number of years ago I was having dinner at Scotty’s restaurant – a sorely missed part of Gladstone’s culinary history. It was a pleasant and uneventful evening until a lady sitting near me stood up and staggered back with a terrified look in her eyes. She was clearly in trouble, but unable to speak, or in fact make any sound at all. She was choking on a piece of steak which had completely cut off her airway. The woman’s husband tried the Heimlich manoeuvre (not recommended these days) and only succeeded in aggravating her. She was turning blue and the situation was becoming dire. No one was sure what to do.

Within seconds, a Zorro-like figure strode calmly but purposefully from the other side of the room, placed a reassuring hand on her shoulder, leaned her forward and delivered a text book blow to her back. The crowd gasped at the sudden and decisive action – and fortunately, so did the lady herself. To our great relief, the blow dislodged the steak and she took a great breath of air. The hero of the moment quietly went back to his table as though nothing had happened.

The ‘hero’ was Bruce Andersen, QER’s current Site Superintendent, who, in a few weeks, will hang up his boots for a well-earned retirement. That night at Scotty’s said a lot about Bruce. His generosity and concern for other people; his practical capability; his ability to draw on his training and make good decisions under pressure; his humility; and his willingness to do the right thing, and take on even the most difficult challenge; his ability to lead. These are qualities that I’ve often seen demonstrated over the 20 years I’ve worked alongside Bruce and especially in the last few, during which we’ve worked closely together.

Bruce has been involved in the work to establish a Gladstone kerogen fuels industry for over 20 years. He was one of QER’s founding employees. In fact his pay number is quite appropriately 001! Over that time he has worked in operations, electrical and leadership roles here in Gladstone; he’s led a team in Colorado, pilot testing Queensland shale; and he worked in Brisbane for a while supporting the design of our current plant.

In more recent times, as always with the loving support of his “bella donna”, Anna, he has done a great job as QER’s leader and senior representative in Gladstone. Anna is unwavering in her support for Bruce and has helped host many VIP visits and community events alongside Bruce on behalf of QER. In all his roles Bruce has made a great contribution and I can’t think of anyone who could have been a better ambassador for our Company. He is very well known and respected in the community. He’s also been a terrific colleague, adviser, confidant and friend and while I know he and Anna deserve every good thing in retirement, I’ll personally be very sad to farewell them.

On a brighter note, I’m pleased to announce that Nigel Clements will succeed Bruce as QER’s Site Superintendent. Nigel is also a long time Gladstone resident and kerogen shale veteran, though he has spent the last few years working across the Narrows on the QCLNG project. I’m very pleased to be welcoming Nigel and Lani back into the QER fold and I look forward to working with Nige again.

Nigel will introduce himself when he takes over this column in a month or so. In the meantime, Bruce will have the last word in his final column in two weeks’ time. I know he wants to express his gratitude to the Gladstone community, and I also know there are many people in the community who have appreciated Bruce’s hard work in support of many important local community initiatives.

Bruce and Anna, we’ll miss you heaps and we wish you a very long, satisfying and enjoyable retirement.

Retirement
The Joy of Something New