Australia has less than three weeks of petrol in the tank the government has warned, as Iran warns it “will not blink” in case of war.

Australia has just 27 days worth of petrol in reserve according to a government review, as Saudi Arabia scrambles to restore its oil production in the wake of last week’s drone attacks.

The country also has 21 days worth of diesel, 23 days worth of jet fuel and 31 days worth of crude oil in storage, according to the The Department of Environment and Energy’s Liquid Fuel Security Review interim report, released in April.

The figures represent the number of days Australia’s stocks would last under “normal use”, but don’t take into account “fuel that is already in or on the way to fuel stations or products in tanker ships on their way to Australia”, the report says.

“It also excludes crude oil that could be refined into products in Australia. If these were included, our consumption days would be higher,” the report adds.

But retired Air Vice Marshal John Blackburn, a former member of the Royal Australian Air Force who has previously investigated the country’s fuel security, told the ABC that was nowhere near enough. 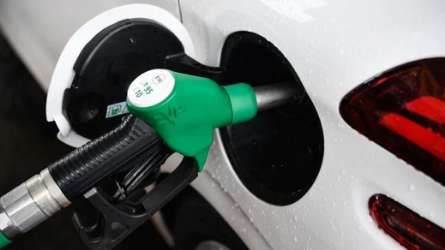 Australia is bracing for a petrol price hike after the drone attacks in Saudi Arabia. Picture: AFP/Fred TanneauSource:AFP 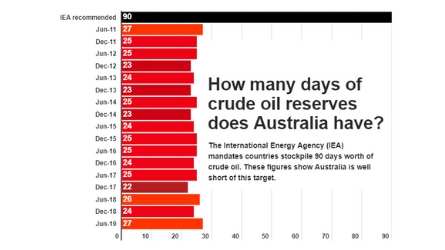 Instead, he claims the country’s reserves would likely dry up after a week if there was a major disruption to supply.

“Australia’s fuel reserves are all about ‘just-in-time’ logistics delivery. It makes economic sense, but it’s not very resilient,” he said.

The warning comes after an attack on Saudi Arabia’s oil processing facilities knocked out half of the country’s oil production — about 5 per cent of global output.

Yemen’s Houthi rebels have claimed responsibility for the attack. But on Wednesday, Saudi Arabia presented fragments of 18 drones and seven cruise missiles which it purported was “material evidence” Iran was behind the attack.

“The evidence … that you have seen in front of you, makes this undeniable,” defence ministry spokesman Colonel Turki al-Maliki said at a news conference.

He described the attack as “an assault on international humanity, a deliberate attempt to disrupt the global economy” and said the range of missiles showed it could “never be launched from Yemen”.

US officials also believe Iran is responsible and the attack has ratcheted up tension in the volatile Middle East region. President Trump has said the US does not want a war but vowed to “substantially increase” sanctions aginst Iran.

On Thursday, Iran’s foreign minister Javad Zarif warned of an “all out war” if the US or Gulf allies launch a military strike.

He added: “But we won’t blink to defend our territory.”

‘NO IMMEDIATE THREAT TO FUEL SUPPLY’

He said Australia had close to 90 days of fuel supply, according to standards set by the International Energy Agency (IEA), a global authority that monitors energy security.

The IEA asks its members to maintain stocks equivalent to 90 days of their annual net imports in case of an emergency.

“By our definition, we’re up around the 90-day mark. That is an appropriate level of stocks because that’s what’s obliged by the International Energy Agency (IEA),” Mr Taylor said.

Except as the April interim report pointed out, that estimate includes fuel “on the way to Australia”, which the IEA doesn’t allow countries to count.

“Australia has up to 80 days (average for 2018) of net imports if we count fuel on the way to Australia,” it said.

“We take the view that stock on water should be part of the IEA obligations,” Mr Taylor argued.

In June, the IEA estimated Australia to have 58 days of oil stock reserves — the lowest among its 30 member countries.

But Mr Taylor said the agency had assured him there was “no immediate threat to Australia’s fuel supply” and there were “ample commercial stocks globally to ensure that Australia has the fuel it needs.”